I realized the other day that I have not updated the blog.  There has been a lot that has happened! To start a couple months ago we met another Apert family who only lives an hour away! Their little boy, Emerson, is just a few months younger then Phoenix.  I love meeting other Apert families.  And, I love that Phoenix will have a playmate who lives (somewhat) close.  They will be able to understand each other like nobody else. 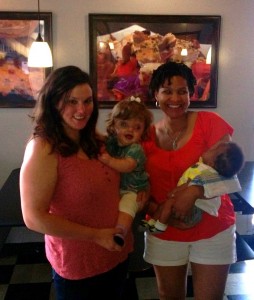 Phoenix and I with Iazia and Emerson. 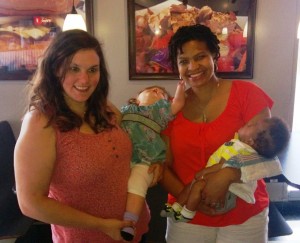 Phoenix being a girl and admiring jewelry!

It has been over one month since we were in Boston for Phoenix’s surgery.  We arrived in Boston a few days before her surgery for pre-op. 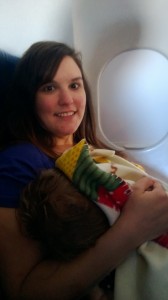 Taking a nap on the plane 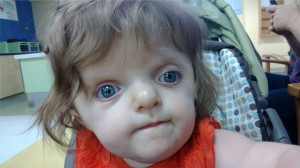 Pre-op is no fun! 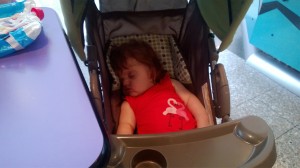 I think pre-op day was harder on Phoenix than the actual surgery.  They did a check up, blood work (they had to prick her 4 times! Poor baby has veins like her mom) and x-rays.  The x-rays were awful. I had to hold her down while Luke held her hand/foot between clear plastic slabs.  I am not 100% sure what was going on, either the tech didn’t know what she was doing, the machine was messing up or  Phoenix’s fingers were just that bad (more on that further down), but we kept having to repeat the x-rays.  Phoenix was NOT a happy camper. Finally, I told the tech that she was done and we couldn’t do anymore. Thankfully, they let us leave without too much of a fuss.

I can barely describe the surreal feeling of handing your child over to a virtual stranger, knowing what is coming for her.  It was an 8 hour surgery! Eight hours as been the longest I have ever been away from Phoenix!!  The nurses kept us updated every 90 minutes or so, which was so nice! She did great during the surgery.  When the doctor came out and talked to us he said that her feet were very easy, mostly just separating the soft tissue with very little fusion.  However, her hands were very complicated. He said that there were extra bones and some of the bones were bigger than they should be.  But, he is still confident that he can get 5 fingers! 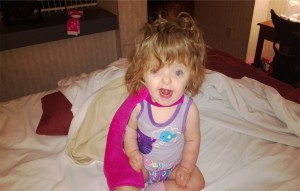 Why yes, I do look this awesome when I just wake up! 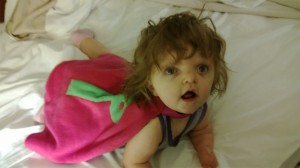 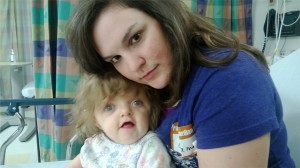 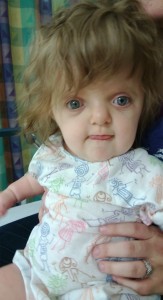 The hardest part for me, though, had to be the recovery at the hospital.  I had prepared myself for the before and during the surgery, but not so much for the right after.  For some reason I thought that there would be instructions on when and what I could feed Phoenix.  But, nope. . . I asked the nurse when I could feed her she said whenever I wanted. I asked her what I should feed her, she said whatever she wants. Umm…yeah…I totally felt confident in giving my 9 month old formula right after surgery…not! So, I started with pedialyte and worked my way up to formula. 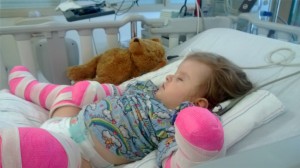 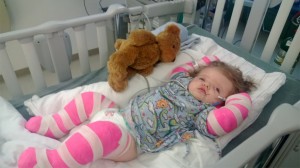 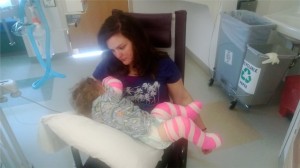 Phoenix ended up spending 2 night in the PICU.  Her heart rate would not come down, and after several tests it came back that she had an UTI. We stayed one more night in Boston, and headed back to Kansas City Monday morning.  Sunday and Monday were rough . . . Phoenix started to refuse her medicine (she was on 2 antibiotics, pain meds, and her acid reflux) than stopped eating. So, while we got home Monday night we were admitted into Children’s Mercy Tuesday afternoon.  At first, we thought that they might putting a central line in, but they put a NG tube in instead.  Putting that tube in was a PAIN! It took one nurse and Luke to hold her down while the other nurse put in it.  Because of the shape of her skull they had some difficulty directing the smallest tube they had in! The tube was able to come out on Friday. But, she still hates taking medicine now. Awesome. 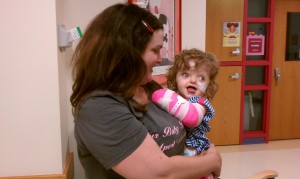 I am ready to go home! 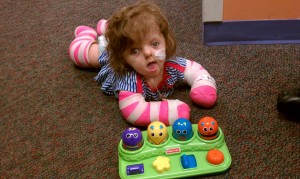 Hanging out in the Childlife playroom 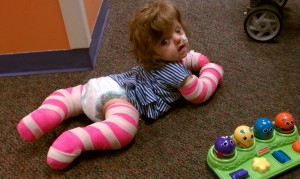 “Face your deficiencies and acknowledge them; but do not let them master you. Let them teach you patience, sweetness, insight.”

Leave a Reply to Dave Kanofsky