Okay time for honesty…I have restarted this blog post a couple times. There are couple reasons why. First, I kept forgetting about it and then I would have to edit what was previously written because things that I said were going to happen happened. Ramble much? Also, my feelings kept changing. It seemed to me that there were a lot of similar things being said by other Apert Mommies. Such as their children being stared at, treated differently and wondering how to process and deal with this world….not to mention how it affects our children. 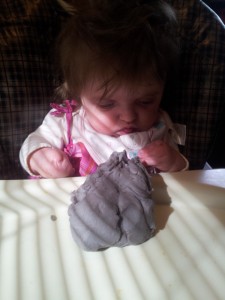 What am I suppose to do with this?

Spring is here and I am now taking Phoenix out more. Most of our outings have been pleasant and people are really kind to us. The other day at Wal-Mart a cashier was playing with Phoenix’s hands and asked me her name…I replied “Phoenix.” Her response, “Oh! Phoenix! A good strong name!!” She put her hand on my shoulder looked me in the eye and said, “Blessings on you!” Then helped my cashier bag the rest of the groceries. Yet, for all the kind people and friendly encounters there are always the crappy ones.  A few weekends ago Luke and I took Phoenix to Comic-con.  As we were walking around people would stare into the stroller. Okay. Annoying but understandable….she looks different…it is human nature to want to look.  But, it wasn’t the ones who just looked that got me. It was the ones I heard after we passed. One group said (rather loudly) “That baby doesn’t have hands!! So weird!! Hahaha!!” I wanted to punch them…in the face…with Thor’s hammer.  Seriously!? We were at freaking Comic-con! Where being different is celebrated! Where 26 year olds can dress up like super heroes and not get made fun of! The most hurtful, though, happened last week. I am really not ready to put what happened out there for everyone to read. I know I vented on Facebook and didn’t give any real details; however, I told some friends and family what happened and right now that is all I am ready for.

I guess I need to grow a stronger backbone; if not for my sake, but for Phoenix’s. I want her to grown up knowing that she is beautiful and strong and has Aperts and is self-confident. 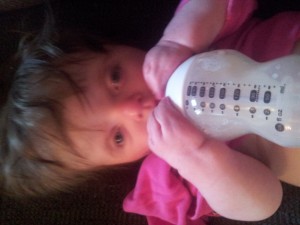 What!? Haven’t you even had your pants changed and taken a bottle at the same time?

Cardiology reported that Phoenix has an innocent heart murmur.  She did great during her ECHO and EKG! During the ECHO she would watch Backyardagans then would stare at the technician during commercials. She tried to help with the ECHO by holding the wand. The tech finally tried to give her own wand to use so she could “help”. 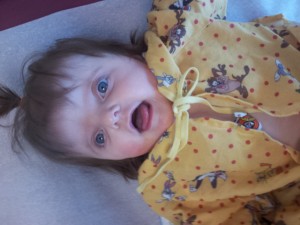 Mom! This shirt is a little drafty! 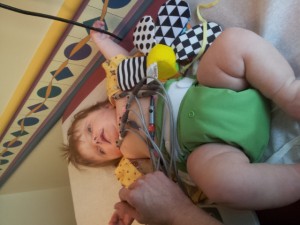 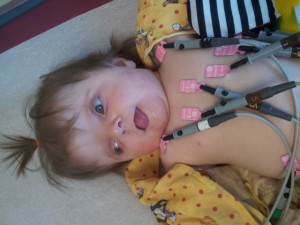 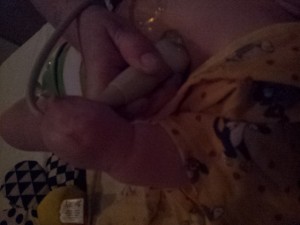 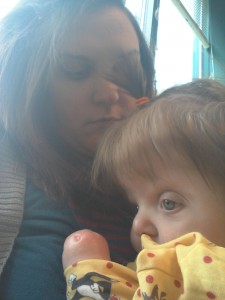 Can we go home now?

I wasn’t impressed with the ophthalmologist. He gave us a good report, but basically said there wasn’t anything that can be done. Her eyes will either get better or not and there is nothing we can do to prevent that. He also said that therapies would not help. I think I am going to get a second opinion. I would rather her have some extra therapy before we jump into surgery.

Phoenix had her 6 month checkup as well. She weighs 19.3 lbs. (93%) and is 27.5 inches long (95%)!! Big girl!! I might of said this before, but I will say it again…I really love our pediatrician. She has been really open to what I have said and is great about keeping up with Phoenix’s medical life.

We got to meet another wonderful family! Their little girl Ely is one year older then Phoenix! The girls had a fun time sharing fingers!! I could of spent hours visiting with them! 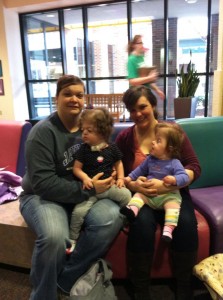 For everything there is a season, and a time for every matter under heaven:

Leave a Reply to Janet