I have always heard of people having visions or dreams of loved ones who have passed. After Phoenix died, I yearned for one. I needed to see her again. I needed to see her happy. Ten weeks passed and nothing; until yesterday morning (which was the 10 week anniversary of her death). After putting Little Brother back to bed from an early morning feeding I dreamed of Phoenix. And, it wasn’t a nightmare! I have a lot of those, but that is for another post. In my dream I was eating lunch, outside with somebody (I don’t know who they were – I have never seen them before in my life) and Phoenix came up. She was slightly taller and thinner; but, her cheeks were still chubby and her fingers were just the way they were when she passed. She started showing off all her new words that she had learned. She also kept saying ‘Ava.’ I have no idea who Ava is or was. I looked up the meaning of the name and it either means ‘bird’ or ‘life’ – depending on the origin. In the dream there was lots of light. Not just light but happy light. Does that make sense? The skeptical side of me keeps saying this is my mind’s way of processing everything. But, my grieving heart says this is her way of telling me she is alive and happy. Ava could be a friend she made or an angel. Or, simply her way of saying my little fire bird is full of life in Heaven.

One day I will be with her again, and not just in a dream. Then I will be happy with her. 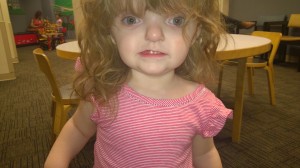 Leave a Reply to Amy