Things you don't realize are a thing, until they are gone.

Things you don’t realize are a thing, until they are gone.

Posted by Beth Coleman on Jun 26, 2014 in Life After Phoenix | One Comment

1.) Walking out the front door. Before children you have no idea how easy it is to walk out your front door. It never crosses your mind that it takes parents at least 10 minutes (I am being generous here) to gather all the ‘stuff.’ By stuff I mean ‘the bag’. Which is filled with diapers, wipes, cup, snack, toys, more diapers and an extra outfit. Every time you leave the house you have to run down the list to make sure all these are there. Let me tell you, they usually aren’t. Then you are frantically running around the house trying to find said items. In the meantime, your little one knows this routine, and starts to cry and cling to you in fear that they will be left behind. After you have gathered all their things, you have to check if you have your stuff. Which again, is not where it should be and sends you on another hunt around the house (by this time you are lugging around a very distressed toddler.) As you are about to walk out the door you realize said distressed toddler has a dirty face and needs their hair brushed. You put all your stuff down, dig out the wipes you just packed and try to clean distressed toddler. After you get the big stuff off their face you realize you are 15 minutes late and figure no one will notice a little milk on the kid’s face. You gather all the stuff and thoroughly ticked off toddler and rush out the door. It is only once everybody and everything is in the car you can breathe. 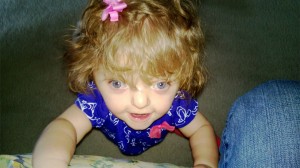 2.) Opening the oven. Before kids opening the oven door was simple. You opened it, put something in or took something out, closed the door. That was it.  After kids you have to become an acrobat. You scan the room for the kiddo, if they aren’t in sight you quickly open door, do your thing, and then sigh a sigh of relief that it you didn’t have to do the following. If the kiddo is in sight, you warn them that you are about to open the oven and it is very ‘hot.’ Once the oven door is open it becomes some sort of magical magnet that kiddos are drawn to. To stop the kiddo you hold out your leg out in front of you to block their path. While standing on one leg, you either pull something out of the oven or put something in very quickly. If you took something out you put it as far back on the stove/counter as possible (because this is now also a magnet). Then quickly close oven door. I repeat, you just did this while standing on one leg, while the other was used to block magnetized kiddo who desperately wants to touch the oven. After the oven is closed, you comfort a very disappointed kiddo. 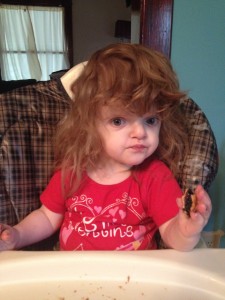 Is that the oven door I hear?

3.) Navigating scattered contents of the lowest drawers in the kitchen. Namely, Tupperware and kitchen towels. Before you have children, you never think that your kitchen has the possibility of being a war zone. The casualties . . . Tupperware and towels. They will be scattered everywhere.  You will pick them all up and put them away, only to find them back on the floor 15 minutes later. You will hear a little toddler laughing as they run from the kitchen. Sure enough, Tupperware and towels are everywhere. There will be those days that you just give into the mess and leave everything on the floor.

Here is the thing though, once you are parents you don’t look at these 3 things (and there are many more) and think of them as a problem. They are just apart of being a parent. However, once they are gone you wish it took an extra 15 minutes to get out the door. Opening the oven has lost it’s excitement factor. You walk into your kitchen and miss the clutter on the floor. Words cannot express the quiet of life after you have lost a child. The quiet is not peaceful, in fact it is excruciatingly loud.

Leave a Reply to Jen Tufts